may experience bruising and swelling 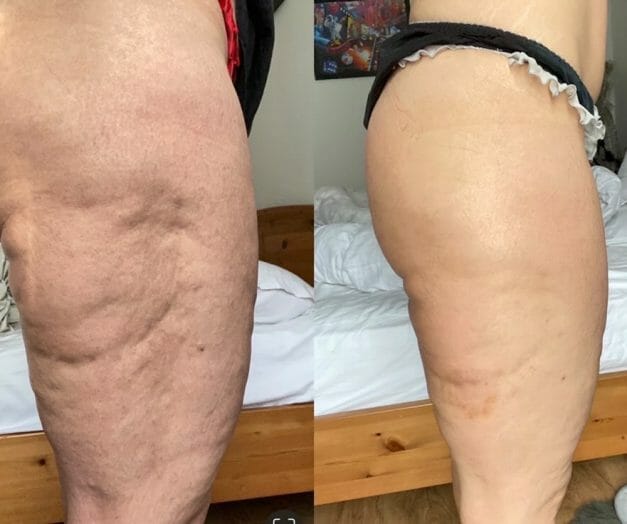 Cellulite is the dimpled skin and nodularity often found on the hips, thighs and buttocks usually described as having an ‘orange peel’ or ‘cottage cheese’ appearance. It is far more common in females than males due to the differences in fat distribution and affects 85-98% of women. There are many causes including sex, age, race, hormones, genetic factors, lifestyle, diet, exercise and stress.

Although cellulite is considered to be normal, many people find it undesirable.

CelluErase is a minimally invasive procedure where a special micro blade is used to separate the bands of fibrous connective tissue, allowing the skin to spring back resulting in a smoother appearance.

This is followed by a mesotherapy application of StrikeCell, specially formulated to assist the microcirculation and further help reduce the appearance of cellulite and uneven skin texture as well as reduction in fat.

The product contains caffeine, carnitine, EDTA, equisetum and artichoke, products that are all known for their scientific benefits in reducing fat and providing firmness to the skin.

We recommend weekly sessions of Strike cell after your CelluErase treatment to assist in attaining the best results.

We use cookies on our website to give you the most relevant experience by remembering your preferences and repeat visits. By clicking “Accept All”, you consent to the use of ALL the cookies. However, you may visit "Cookie Settings" to provide a controlled consent.
Cookie SettingsAccept All
Manage consent

This website uses cookies to improve your experience while you navigate through the website. Out of these, the cookies that are categorized as necessary are stored on your browser as they are essential for the working of basic functionalities of the website. We also use third-party cookies that help us analyze and understand how you use this website. These cookies will be stored in your browser only with your consent. You also have the option to opt-out of these cookies. But opting out of some of these cookies may affect your browsing experience.
Necessary Always Enabled
Necessary cookies are absolutely essential for the website to function properly. These cookies ensure basic functionalities and security features of the website, anonymously.
Functional
Functional cookies help to perform certain functionalities like sharing the content of the website on social media platforms, collect feedbacks, and other third-party features.
Performance
Performance cookies are used to understand and analyze the key performance indexes of the website which helps in delivering a better user experience for the visitors.
Analytics
Analytical cookies are used to understand how visitors interact with the website. These cookies help provide information on metrics the number of visitors, bounce rate, traffic source, etc.
Advertisement
Advertisement cookies are used to provide visitors with relevant ads and marketing campaigns. These cookies track visitors across websites and collect information to provide customized ads.
Others
Other uncategorized cookies are those that are being analyzed and have not been classified into a category as yet.
SAVE & ACCEPT